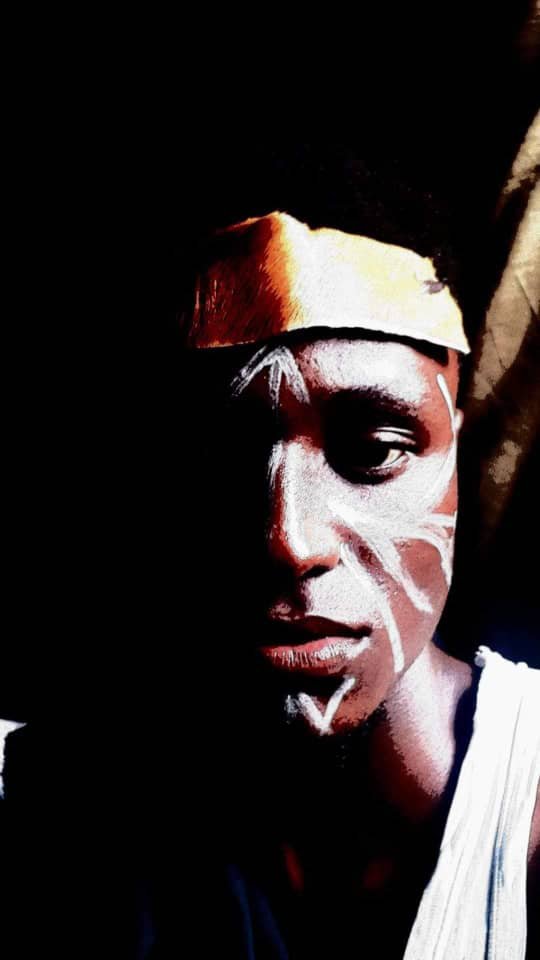 Friend; so, am I speaking to kitaka Alex or Kitaka Alex in the character?
Me; hmm! What do you mean?
Him; it is just that I may be speaking to the Kitaka Alex who is in character.
I capsize in a sea of flabbergast. A torrent of questions serpentine into my mind.
Is this how far it gets?
Does being an actor mean you lose your identity? Furthermore, does it call for you to be looked on as “someone always somebody else” among your peers or relations?
As I am writing this, it is a Sunday morning. 6th October 2019. I am excited for this is my birthday month. And according to Egyptian Astrology, I am ISIS my beneficial color is white. My soul is devoted to the clearest of quests. I am a supreme messenger of life. s
I am still dressed in my pajamas, I am sited on a green, three legged, plastic chair and typing. The light from the desktop pierces my eyes; however I win the war, and put on my spectacles Music plays on Sanyu Fm. My recollection is that this is one of the early radio stations in Uganda.1993 a year to my birthyear.
I am bothered at the fact that, it plays the music from almost the same playlist. So I can predict the next song after song after song. Pretty boring I think. I connect my phone via Bluetooth and play reggae roots. Bob Marley’s original version song “No woman no cry.”
It is this ambiance that blends with the still air in my sitting room. Despite the drizzles, the sky is clear, clouds white like a baby tooth.
This triggers me to share my thoughts on Shades of an Actor living in the moment
The moment for an actor is to live, but it far beyond living, but ability to truthfully live under a scenario. Life is not a one face scene. It is not a uniform rhythm or a song. No man or woman does things the same way he did them yesterday. Since the epoch of time, the sun has never shinned the same way it did yesterday nor has the rain.
“All the world’s a stage and all the men and women are merely players” by the popular English man and greatest playwright there is William Shakespeare.
Technically, we are all actor. But for one to be called an actor is one that adopts and narrates a story as it is by a character.
An actor spends entirely his life living in several moments, most importantly, He is one ably to live truthfully and marry his or her life with several moments.
Therefore, an actor dissolves in a given character. The actor gets swallowed. The actor gets into several relationships. An actor cohabitates. He walks down the aisle. An actor walks a thousand miles and before he knows it, he has gone back to the past; He is one living in the present and searing into the future. An actor is one who commits all sorts of immorality. You are at liberty to sway on whichever lane you desire.
The mirror of society has reflectors who are actors.
The implication that as an actor, you must be in position to approach several aspects of dread in your life, the weight of other characters lives. It is this spark of boldness that cements onto your life as an actor
What is the position of an actor? How does he or she marry his life with the life in the moment?
This is loading. . .