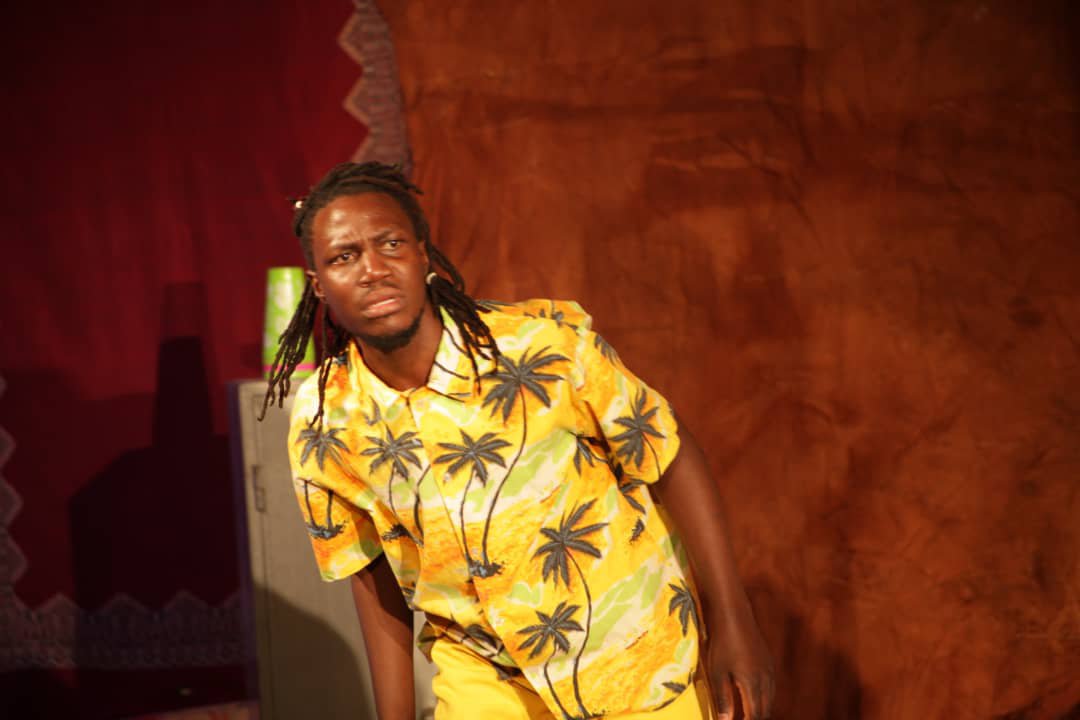 Benson Benkya is a character in the play CRAZYSTORMS.
This is a Play written by a popular Ugandan Playwright and Actor Mr. Phillip Luswata. Ben, whose sir name is Benkya is portrayed as a love smitten young man of 28 years old. He comes from a prosperous family and has lived a papamered life
The Play Crazy Storms is a melodramatic drama that invites the audience to witness a spectacle of both laughter and pain, identifying yourself mostly with the character(s) experiencing its emotions of sorrowfulness combined wonder. You find yourself sympathizing with some actor(s) as they narrate the story on stage, at the same time you find yourself at the threshold of withdrawal from that feeling as the actors reveal their true colors and intensions in the Play.
Set in a refugee camp, the Play rotates around a woman of twenty six years old. Sharon Barungi is her name. She is an attractive woman, and a former owner of a salon. She has seductive and colorful choice of dress. It is her whom all other events come about.
The only female character and actor in the Play and on Stage respectively, the rest are male. And with this, we see the power of women and the control they have to affect activities and more than two men within a circle
As Ben, I am love smitten. I am reported to say, “you don’t have to continue stating in the camp if you don’t want. My mother sent me an email from Nail”
In the bid to express my feelings towards her, with hope to win her heart. With a burning desire to have her as my one and only woman
She responds to me, sarcastically laughing “you are not my type! You understand Benson! Let it not be said that when problems came calling, Sharon ran off with a young boy!”
This breaks my heart. In all my endeavours, was looking forward to winning her heart.
The rest of the men express their feeling towards her. Throughout the Play, it is only Maneno who seems disinterested in her. His only desire is wealthy acquisition from Munduki Samson Clementi. A forty five year old. He hails from a financially challenged family. He faces hard times and once owned a restaurant.

Deputy Babadi later expresses how he has taken long without making love to a woman because of the situation. He lives in a house over crowded with his wife’s sister and children and…

Deputy Babadi, known as Dominic Babadi Kasokoso. He is a thirty nine year old. A teacher.

He is sex starved. He masquarades so many professionals so as to win Sharon.

He begs Munduki and me to leave so he can wine and dine with Sharon.
The first of its kind, it is in this Play I have acted in my life where I get on stage and only leave stage at the end of the Play. Literary, I open up the play till end. This is quite a challenge, as one has to think about the audience and also thinking about doing something new every now and then to keep the audience hooked on to watching.
At the opening, I appear on the stage riding my pimped up music. Listening to reggae music. Wearing my multi colored cap, g my head to the music, dread hung out loose. A flowery Hawaiian shirt gives me the look of creativity.

Upon packing the bicycle, I move around dancing. My attention is suddenly grabbed by the scene of Sharon’s underwear hung up just adjacent to her knit bed.
Asides is where she sells warrajji and jerricans visible by the counter. With several glasses and beer bottles. I am mesmerized looking at the under wears hanging up.
And this sets up and forty five minute production on stage. As an actor, I have to marry my life with a character. I have to reconcile with who I am and who the Character is.
Each and single day, I look for alternative of how to sail from one character to another but most importantly I look for grounds where I can maintain and sustain my personality so as not to appear as somebody else in the eyes of peers.
Actors, we reflect times. We are mirrors, as a mirror, you reflect so many faces.
How do you live by that?
How are you able to do it?
Do you remain a mirror after a reflection or you become what you have reflected for the rest of your time?

Published by Kitaka. K. A

I am a Creative Facilitator, short story writer, Playwright, Poet, Keyboardist. An actor and Emcee. A Professional actor, I specialise in Theatre/stage plays. With a keen eye on what goes on in our societies. All these events mirrored in society, I used Poetry, Plays writing to critically analyse these events in our lives. My first play entitled BRAINS BEHIND BRAIDS. which is unpublished yet, was performed by Students of Makerere University. Students of Performing Arts and Film. View all posts by Kitaka. K. A

7 thoughts on “Experiencing Benson Benkya in the Play, CRAZY STORMS”